We're no strangers to voicing our concerns about lofty indexed universal life insurance assumptions.  In fact, we were an early voice seeking to temper the returns on IUL as the product began picking up serious steam nearly a decade ago.  Then came the complaints from major life insurers.  Most of those insurers had a vested interest in subduing index accumulation figures.

Those companies dealt heavily in the whole life insurance space and sought to bring expectations closer to their own cash value projections.  Right, wrong, or indifferent, they won a small victory in 2015.  The NAIC formulated Actuarial Guideline 49, which placed several restrictions on the assumptions agents could make concerning the projected index accumulation rate on indexed life insurance products.

In order to help ensure understanding of the issue at hand, I want to take a moment to explain the full extent of the concern we and others have and how that concern developed.

[thrive_text_block color=”blue” headline=”Index Accumulation Interest Rate Example”]Larry owns an indexed universal life insurance policy where he chooses the 1-year point to point S&P 500 index option.  This option pays Larry interest on his cash value once per year.  The interest rate is the one year change in the S&P 500 index.  The life insurer uses the value of the index on the first day of the policy year and the value of the index on the last day of the policy year.  It then calculates the rate of change using the following formula:

Larry will receive whatever this rate is as an interest payment on his cash value up to a specified cap.

Due to the variability of indexed universal life insurance interest payments year-over-year, we agents have to select an assumed static interest rate used to compute all future projected cash values for the policy.  The rate needs to reasonably depict the functionality of the policy, without overselling or underselling the potential accumulations of the cash value.  It's likely obvious that this opens up a wide possibility for abuse.  One could assume an extremely high-interest rate and dupe unsuspecting individuals into buying something they didn't ultimately want.  To be sure, the insurance industry sort of placed hurdles to abuse by setting maximum assumable interest rates on policies.

Many, including us, argued that these limits were high and often enabled agents to overstate the likely performance of indexed universal life insurance policies.  Some insurance companies and more…optimistic…agents argued that historical market data justified these maximum interest rates.  The problem with that argument is twofold.

Insurers and some agents looked at annual stock market returns to arrive at the average index credit achieved by a certain index option assuming a specific cap rate, floor, and participation rate.  Let's, for the sake of an example, assume that this was the last 30 years of annual returns for the S&P 500.  Let's also assume that doing this results in a calculated average of 8.2%.

While these details aren't necessarily important for this issue, let's also assume this scenario involves a 1 year S&P 500 index option where the cap rate is 14%, the floor 0, and the participation rate is 100% (please note: the actual average for the index might be higher or lower than 8.2%, that's not important for this example).

So in this example, the average index credit achieved over a hypothetical 30 year period is 8.2% on this indexing strategy.  Foolishly, some agents then assumed that they could project future values using this 8.2% as the year-over-year index credit earned on cash values.

The problem is that sequence (or the timing) of the index earnings matters in real life so even if the calculated arithmetic average is indeed 8.2%, that does not mean it will be the effective index credit earned in all years on the policy.  The effective index credit could be a number much lower than 8.2% and this will greatly influence the actual results achieved by an indexed universal life insurance policyholder.

This mistake is the same one made by those who advocate stock market investing justified with the same arithmetic average as the assumed rate of return on the investment each year.  The geometric average tells us the effective return achieved over a historical time period and this calculation much more precisely tells us what we might expect for actual results in the future.

Index life insurance (like all indexed insurance) creates the returns necessary to pay the index credit through the purchase of market options (e.g. puts and calls).  The typical strategy is a collar and the pricing of options has a direct effect on the floor, cap rate, participation rate, and spread of the index option.

Over the past several years, options pricing moved in a direction that drove cap rates down on all indexed universal life insurance policies.  Notice that market conditions in terms of the stock market have not deteriorated.  Additionally the bond market, the biggest influencer of life insurance company returns on investments, also experienced no major setbacks.  The price to trade options favorably for creating indexed features of insurance products, however, is not as favorable as it was just a few years ago.

What ultimately drives the options market in a direction that is more or less favorable to a life insurance contract is multifaceted and I'm not going to pretend to hold profound expertise on the subject.  I know the intimate “ins” and “outs” of life insurance contracts, but I am not an institutional options trader.  While I have a general sense of what is favorable and what is not favorable, I can't predict what current trends will cause a specific insurer to enhance or reduce its IUL features.

I also have no way of telling you what specifically in the past made conditions more or less favorable to a life insurer.  And I certainly don't know what conditions over the last 30 years sustained the current cap rate at XYZ company.

So historical market data laid over any life insurers current index options with their current cap rate and such completely ignores a crucial question.  Would the index option have the same cap rate for the entire 30 year period?  The answer is most likely no.  If it did change, what would it change to?  That's an extremely difficult thing to flesh out.

The NAIC officially adopted Actuarial Guideline 49 in 2015.  AG 49 sought to place tougher restrictions on insurers' projected assumptions concerning indexed universal life insurance.  It did this primarily by tying the maximum interest rate assumption to the insurance companies earnings on invested assets.  Depending on how the insurer hedges credit obligations, the maximum allowance was 145% of the net earnings on invested assets.

But AG 49 left a big loophole open for many life insurers to exploit, and exploit they have.

It's somewhat unfair to declare the exploitation of index bonuses as a loophole in AG 49.  In truth, the practice of paying some sort of bonus on indexed products was relatively undeveloped when the model regulation came about.  But insurers quickly figured out how to codify them because they posed a great opportunity to skirt AG 49 restrictions.

We quickly learned that this generous offering wasn't intended as insurer benevolence.  Instead, it was a way to juice the projected returns on an IUL illustration.  You see, while the insurer is certainly tied to AG 49 restrictions, any guaranteed bonus interest stacks on top of the maximum allowable interest rate.

At first glance, this might seem innocent.  It is, after all, guaranteed.  So it's not like the insurance company can remove the index bonus.  But they can reduce the cap rate.  Just because life insurance companies found a way to enhance the projected values of their indexed universal life insurance contracts doesn't mean they have intentions on making those projections materialize.  Sure if market conditions enable the insurer to create those returns it will have no problem producing them.  But no life insurer is going to break its back if the market turns out differently.

Life insurers definitely want to return as much value to policyholders as possible.  Some insurers are more optimistic about doing this than others.  They aren't plotting against you.  But some of them need a sanity check.

Thanks to Sheryl Moore at WINK for doing the number crunching on several popular IUL policies currently available for sale.  She noted that some bonuses currently produce an effective assumed interest rate on cash value nearing 14%.  That means the projection assumes the policyholder earns 14% interest on his/her cash value every year of the policy!

Sheryl also did the math to produced guidance on what interest rate assumption created an effective 6% credit on cash values inclusive of the bonus.  Here is a replication of that chart: 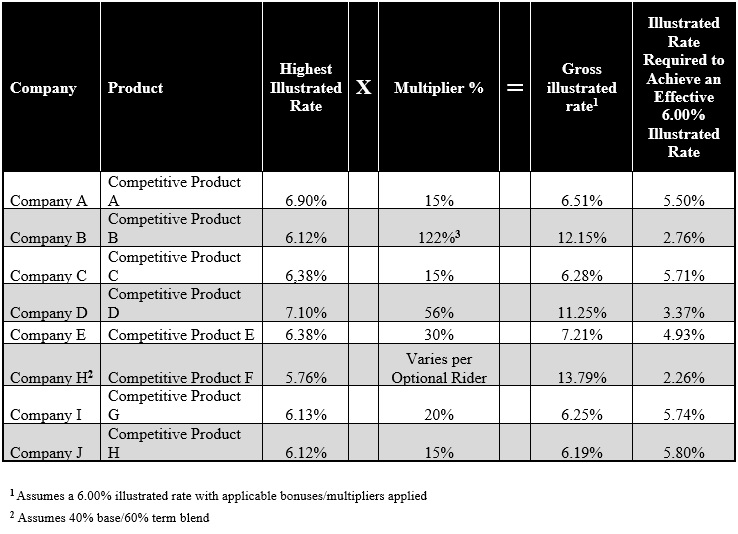 For some products, the agent needs to drop the assumed interest rate down below 3% to achieve the assumption that the policyholder earns 6% on his/her cash value in every year.  I've received a lot of indexed universal life insurance proposals from potential buyers who wanted my opinion before they bought.  I've never seen an illustration produced by an agent that assumed a rate below 6%.

Bonuses are Still Good…But be Careful

I don't intend this blog post as an attack on indexed universal life insurance bonuses.  They are neither good nor evil.  They simply exist as a feature that can benefit policyholders.

This being said, the old aphorism remains true.  If it sounds too good to be true…

We have to evaluate life insurance options keeping in mind that life insurers do not have some magic pill to produce returns completely unbridled from their risk/reward bounds.  While IUL policies certainly have the potential to occasionally perform far better than other fixed life insurance products, they cannot do this in perpetuity.