Oops!! Not sure what happened with our other post today…but hopefully it works this time.  Thanks for your patience.

While it’s not the whole story, the yield on assets under management can help indicate a company’s financial fitness in terms of being able to maintain current caps on its indexing account, which affects how well the policy, will perform longer term.

Indexing: How Interest is Credited

We’ve discussed the mechanics of indexing before but for a really quick introduction the essentials are that money in the account is generally credited a rate of interest that represents the percentage change in an index (e.g. the S&P 500) over a certain period of time (e.g. one year, one month, two years, etc.).

Because the indexing strategy is clearly spelled out at inception, life insurers who issue this type of product are somewhat more limited in their ability to adjust interest payments if they incur unexpected investment losses. With whole life insurance and what is known as current assumption universal life insurance, the insurer can simply reduce the dividend or the annual interest rate respectively.

Because the insurer cannot dictate the rate of interest under an indexed universal life contract it must do something else if it finds itself in a situation where it’s paying more in interest to policyholders than it is making. It can’t raise cost of insurance as it would need claims experience to justify the rate increase. It could (at least in theory) increase administrative charges, but those are relatively small and unlikely to make up for any substantial shortfall. So, the method of choice is to lower caps, which in turn reduces total possible credited interest, and over time will reduce the average rate credited per year.

Alternatively, if experience is better than expected (i.e. the insurer make more money than it had planned to make off invested assets) than it could increase cap rates to allow for more credited interest to policy holders.

I want to focus on the term general when I declare asset yield an indicator to policy yield. Just like we noted in the whole life article on the same subject, it’s a large piece of the puzzle, but still only one piece and not a definitive piece. There are still other considerations that come into play regarding how an insurer derives profits from a life insurance policy.

So with that in mind I want to note that this indicator is helpful in the broad sense but mostly useless in the more laser-focused sense. Meaning if looked at a product with a very high cap and a very high corresponding assumed rate of return, we would want to ensure that the carrier offering that product had a relatively high yield on invested assets to support the assumed yield.

Derivatives Keep them in Mind

Keep in mind that the financial tool that is unique in most cases to indexed universal life insurance is the use of derivatives (puts and calls to be exact). Not that their use is completely unique, just that there is a higher prevalence of their use with indexed products. This use of derivatives greatly helps augment return, further highlighting my earlier point about the limited scope of this comparison—again works really well in very broad terms, but not so well in more precise ones, very intentional redundancy going on here.

So here are the numbers when we compare 21 U.S. life insurers who issue universal life contracts with indexing options. I believe I’m correct in stating that we’ve included every major player and event a few obscure ones (yes, Guardian now has an indexing option on their VUL product). 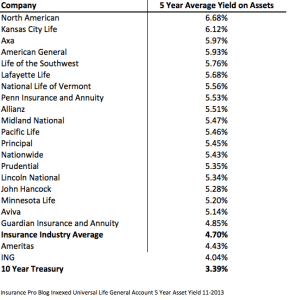 Compare to the Whole Life Results?

Nope we can’t do that. The main reason is simply that the whole life results were done prior to the 2012 numbers being finalized and as such was done on a 2007 through 2011 range. You’ll notice that the average yield of the industry has come up slightly.

Other important factors regarding prospects for sustained yield projections are:

Also, simply picking a company based on where it falls in this ranking is potentially disappointing. Kansas City Life for example ranks better for investment yield than Axa and American General, but manufactures a product that is quite expense heavy and as such there’s a pretty good drag on performance. Both Axa and American General have products that could (even with lower yields) potentially perform better.